The sample code below creates 3 different string variables  ( str1 , str2 , and str3 ) and assigns each variable the values you can see below.

As you can see, you don’t  need to have letters in a string. You can have symbols like the tilde ~  or an asterisk *  or even just a space like the first character of  str3.

So, now that we know how to make a string in Python.

Look at the 4 variables below, can you identify which one(s) are strings?

Only the first two variables are strings! To be a string a variable only needs to do one thing: its value must start and end in quotation marks. That’s it.

var3 and var4 are not strings. var3 is a boolean and var4 is a floating point variable.  The Python interpreter sees var1 as a string . To Python, var1 just happens to have a capital T as its first character, a lower case r as its second etc..

What if I want to talk about the first character in a string? Or the second character? How do programmers refer to specific places in the string.

Well, we refer to the position of individual characters in the string as its index.

The first character is at index position 0 .  Python is not the only language that starts counting at zero– Many languages start counting do. You’ll get used to it 🙂

So, if you want to print out the first letter of str , you’d write the code :

And your console would show a capital P since that’s the first letter of str . 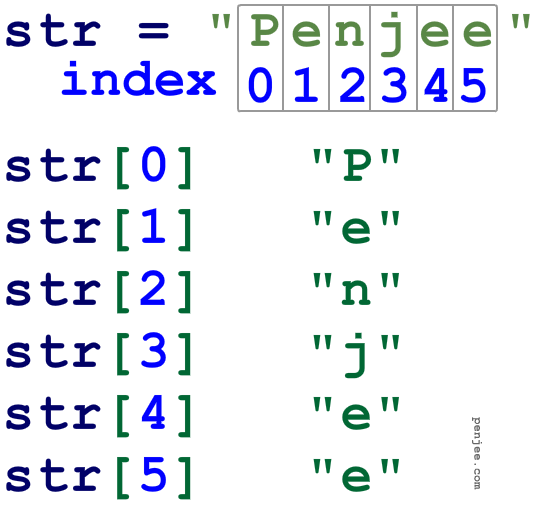 So, if you wanted to print second letter of the string above you could use the code below :

Since the first letter is at index 0, the second is at index 1 and if you ran the code above you’d see the following output in the console.

There’s also a very cool shortcut built into python to access the last character in a string by using index -1 :

In many languages like Java for instance, there’s not an easy way to get the last character in a String, but Python provides this nice convenience method !

So, now that we know how to access any single letter in  a string, let’s explore how to extract multiple letters of a string.